One of Mutagen’s most common use cases is to create synchronized caches of macOS and Windows filesystem contents in ext4 volumes inside the Docker Desktop VM. These caches can be used to replace the virtual filesystems (such as osxfs, gRPC FUSE, and Virtiofs) that are used to implement bind mounts in Docker Desktop. While these virtual filesystems are great for quickly making host OS files available to containers, they often exhibit significantly slower performance during operations on very large codebases. Even relatively small codebases that bind mount large dependency trees (such as node_modules or Composer directories) can suffer reduced performance when building code or running applications.

Note: This extension is similar (but unrelated) to the built-in Mutagen caching functionality that shipped with Docker Desktop temporarily in 2020. Differences include a more detailed UI, custom ownership settings, and high-performance Linux filesystem watching.

The extension can be installed using the following command:

The extension is self-contained and does not require Mutagen to be installed.

To update the extension, use:

To use the extension, you’ll need to create a filesystem cache for one or more locations from which you typically bind mount code. Once a cache is created and initialized, you can make use of it by targeting a special Docker context. This section outlines these steps in detail. For a quick and concrete example, check out the demo below.

To create a new cache, click the “Create Cache” button and select a directory: 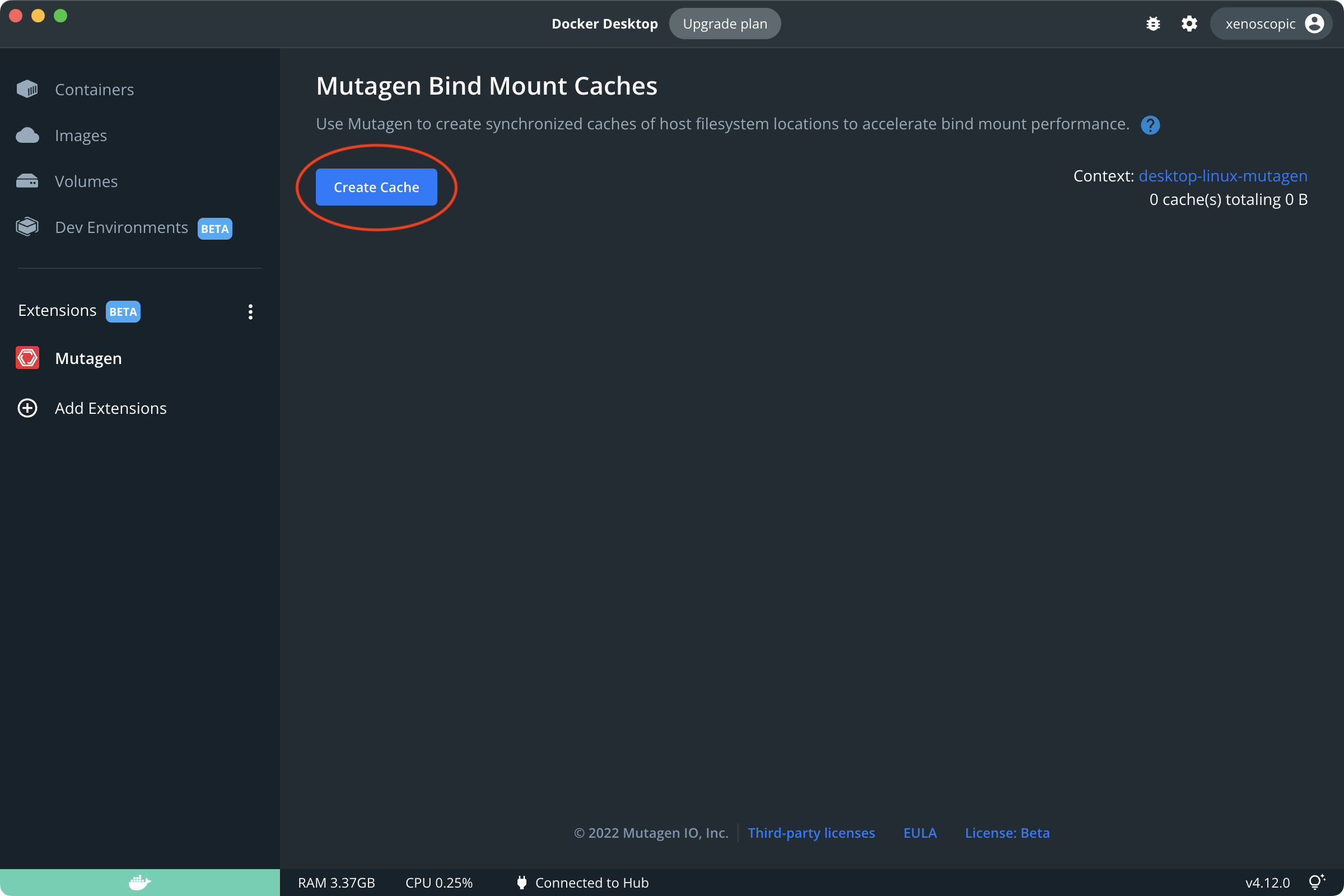 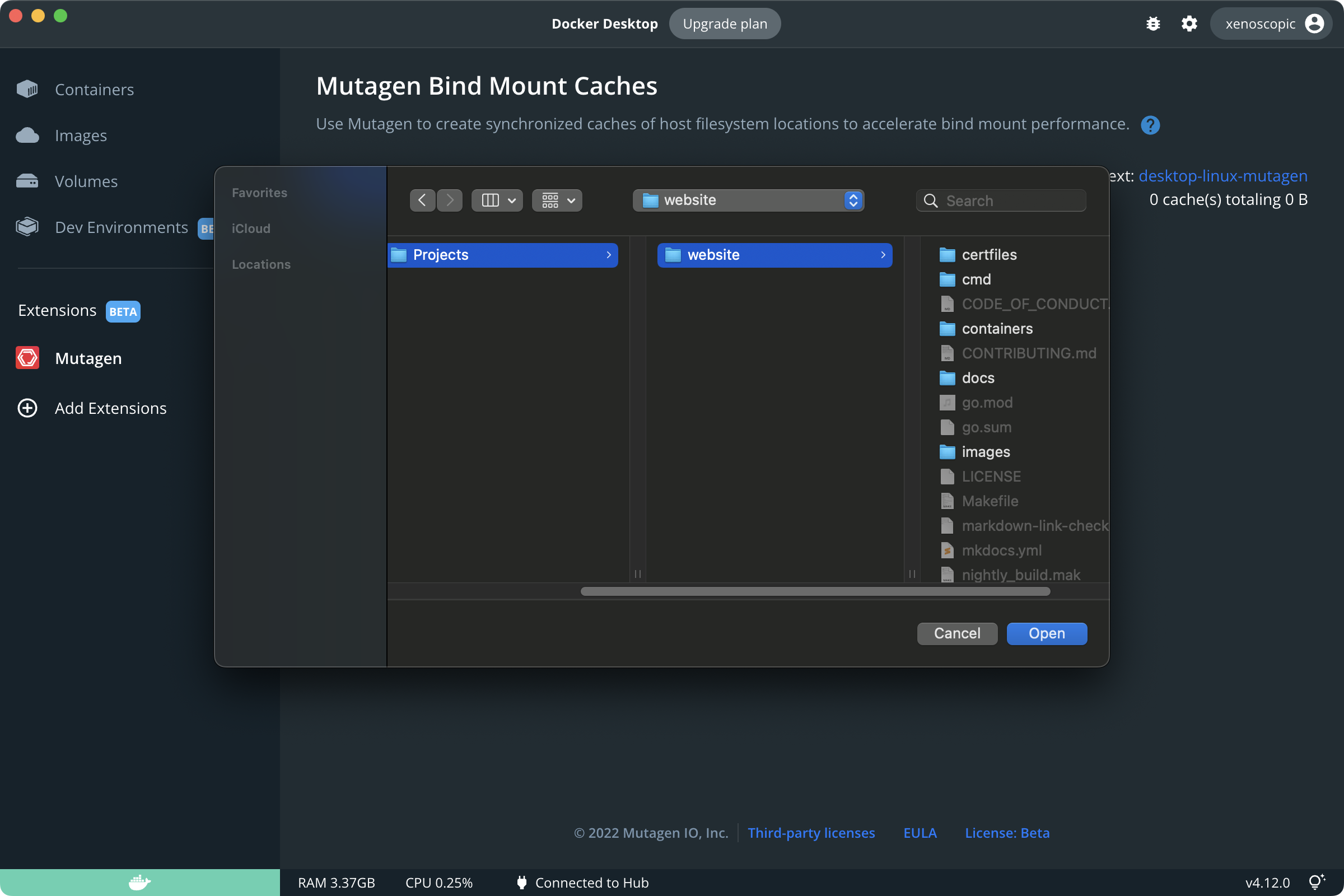 After selecting the cache location(s), you’ll be asked to set the default ownership for the new cache’s files in the VM. The extension will only replace bind mounts with a cache when the ownership for that cache matches the user and group ID for the container requesting the bind mount. 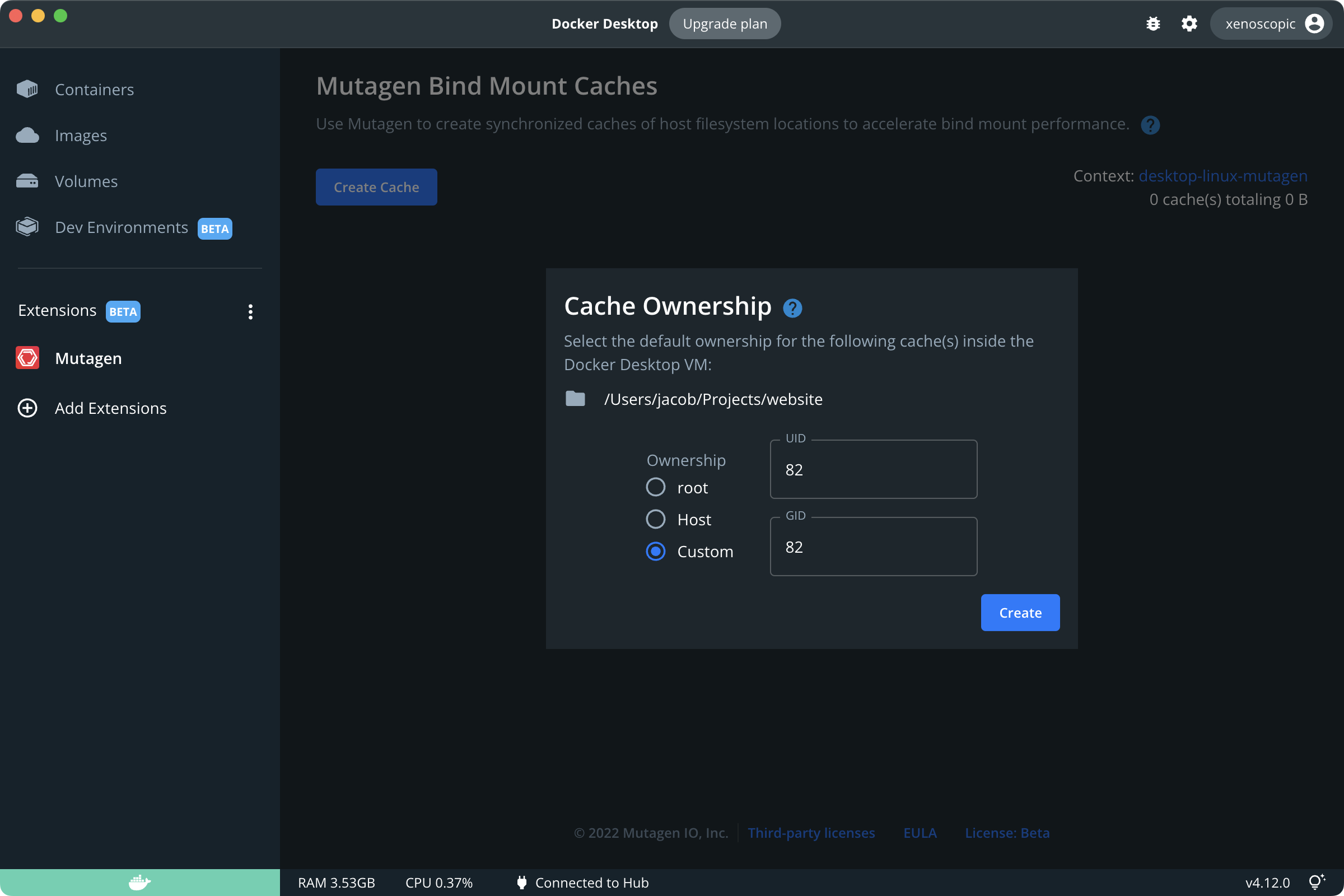 Note: The virtual filesystems used for bind mounts in Docker Desktop will typically present a “fake” ownership to containers, telling every container that its user/group owns the files that it sees in a bind mount. While this makes for a simpler default setup, it can cause conflicts if those containers change the ownership of those files, because that modified ownership information will be propagated back to the host filesystem (via hidden file attributes) and thus to other containers bind mounting that location. The Mutagen extension allows you to create separate caches, each with different (and “real”) ownership, which keep their contents (but not ownership) in sync.
Tip: If you’re unsure of the default user and group ID for an image, you can typically use docker run --rm --entrypoint id <image> to print out the IDs. You can also provide a user specification to this command, which can be useful if you know the username for the container entrypoint but not the numeric user ID. For example, if you want to run an image based on httpd:alpine as www-data, you can use docker run --user www-data --rm --entrypoint id httpd:alpine.

Caches take a few seconds to initialize as files are copied into the Docker Desktop VM. During this time, they will show a PREPARING indicator. 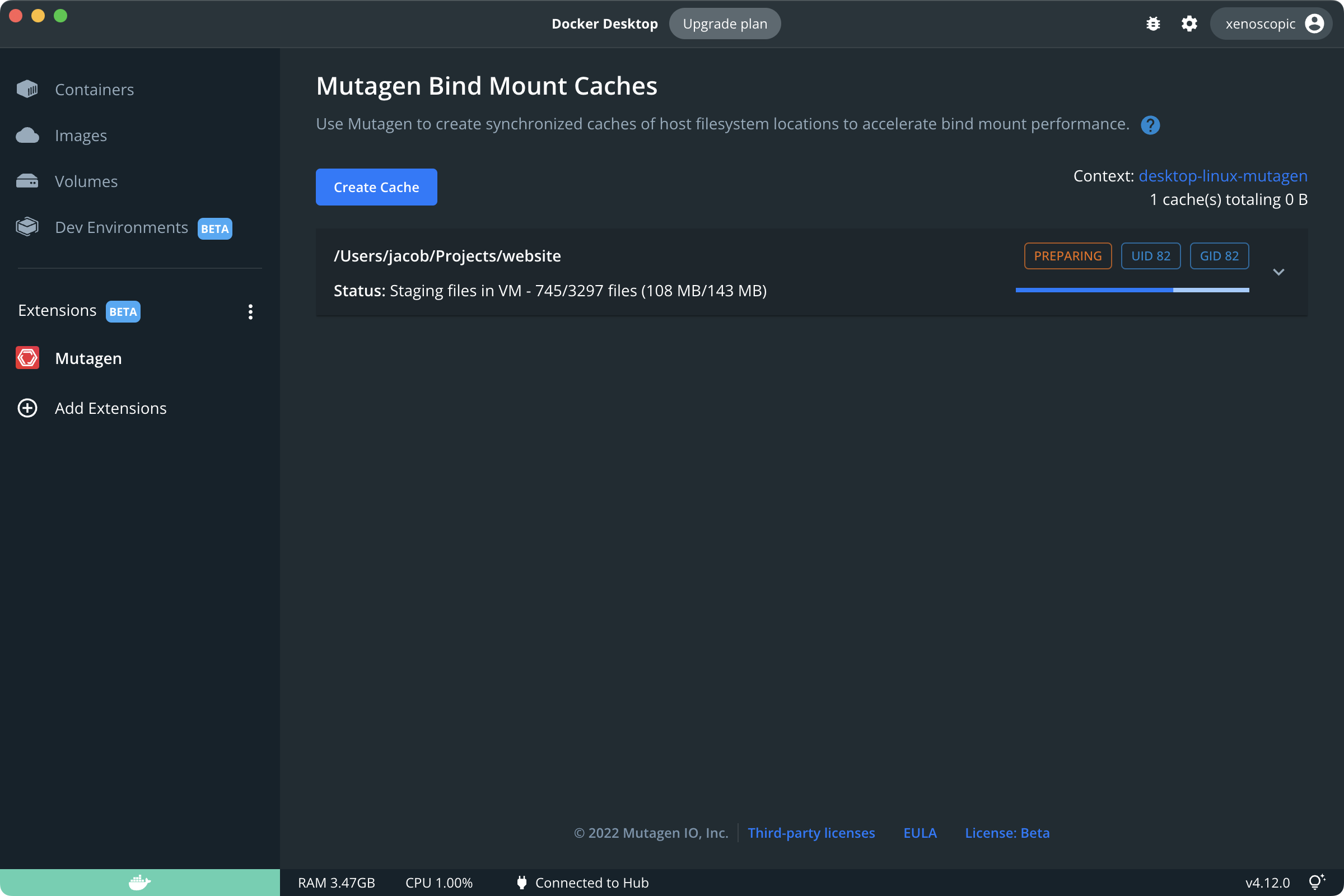 The extension pane presents a list of caches, each with the origin of their cached contents, the owner user and group IDs, and any other relevant status information. To get more detailed information about a cache, you can click on it to expose a pane detailing the cache’s content and utilization: 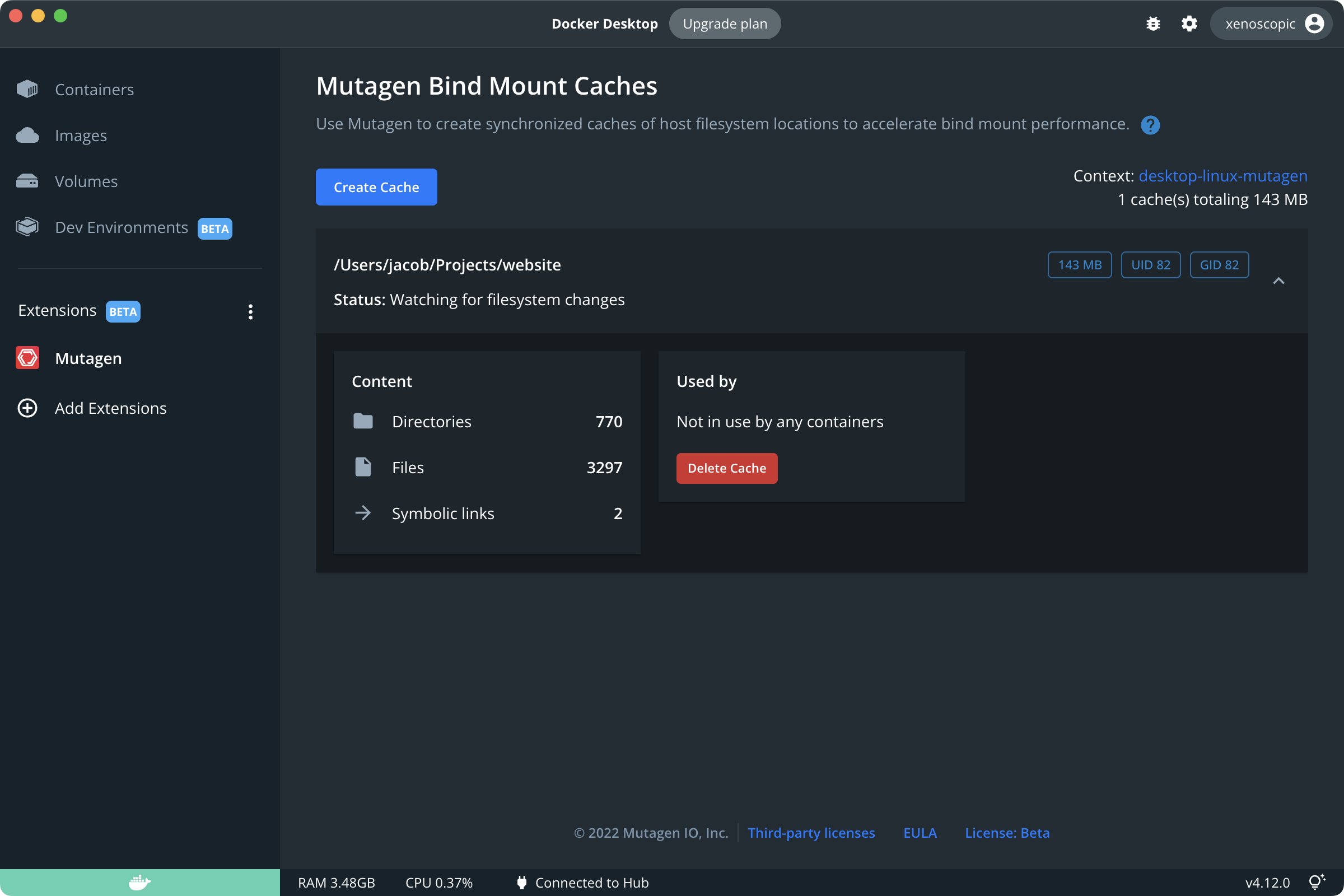 When caches are in-use by containers, they will have an IN USE indicator. Caches that are in-use cannot be deleted. Information about which containers are using a cache can be found in the detail pane:

Once a cache is no longer is use, you can delete it using the “Delete Cache” button: 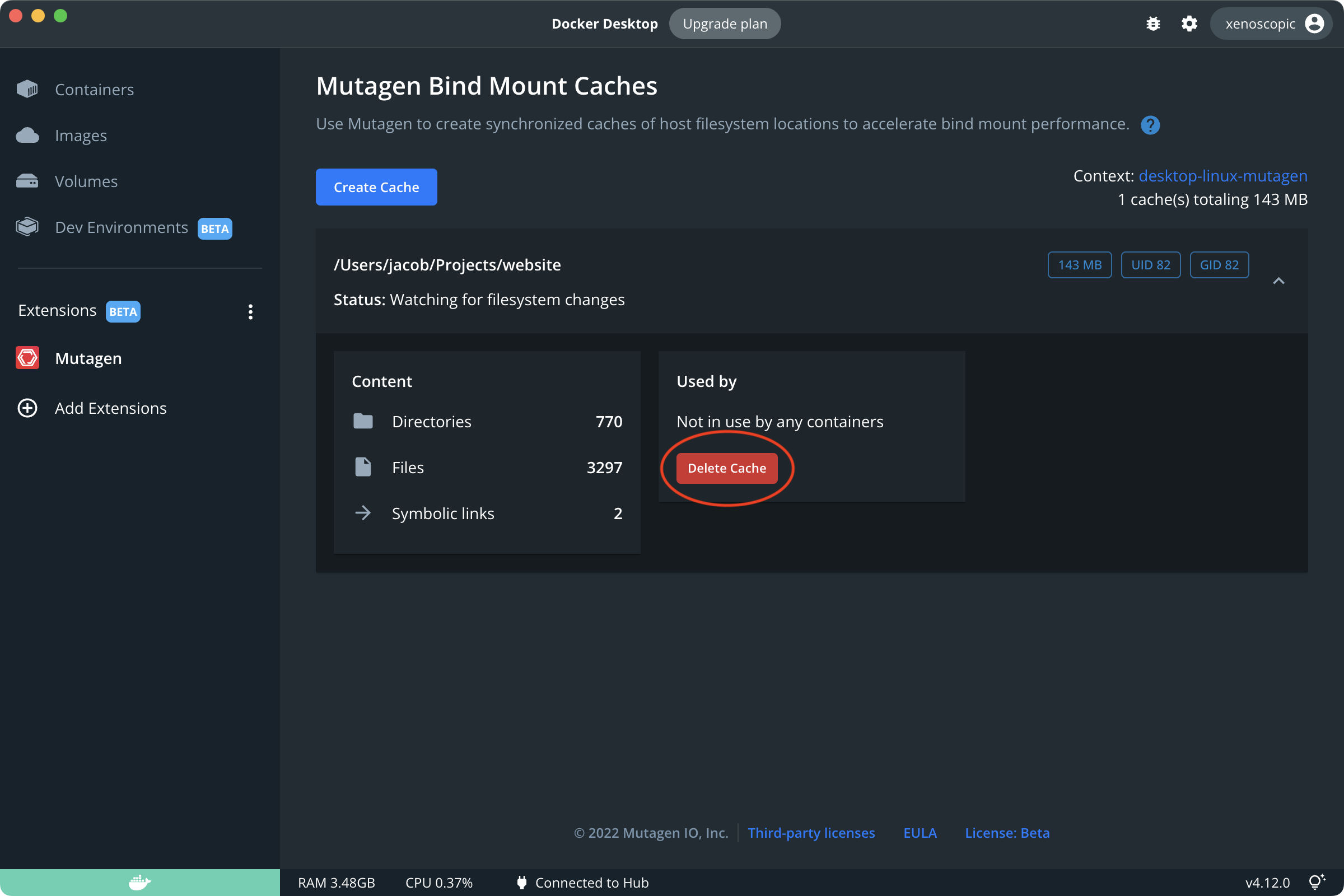 You can use this context on a per-command basis using the -c/--context flags, for example:

Tip: If your development tools use a Docker client that isn’t aware of Docker contexts, then you can also use the DOCKER_HOST environment variable to target the Mutagen Docker endpoint. You can use docker context ls to determine the endpoint on your system.

As an example, try using the extension with the example-voting-app project. This is a relatively small project and thus won’t benefit tremendously from Mutagen enhancement, but it illustrates the typical Mutagen extension workflow.

Start by cloning the repository:

Next, create a cache of the repository using the Mutagen extension: 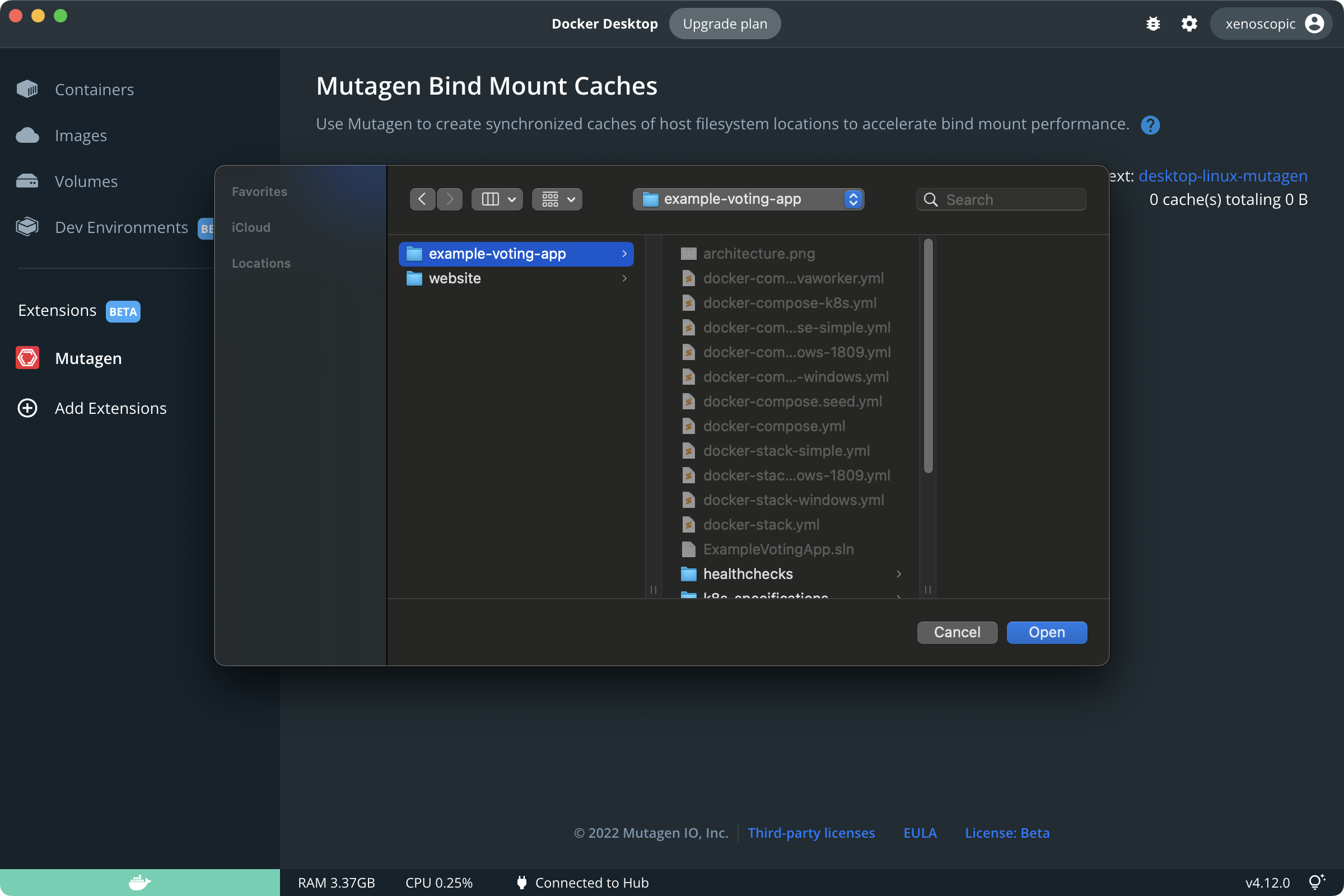 This project uses containers that run as root, so you can leave the default ownership setting: 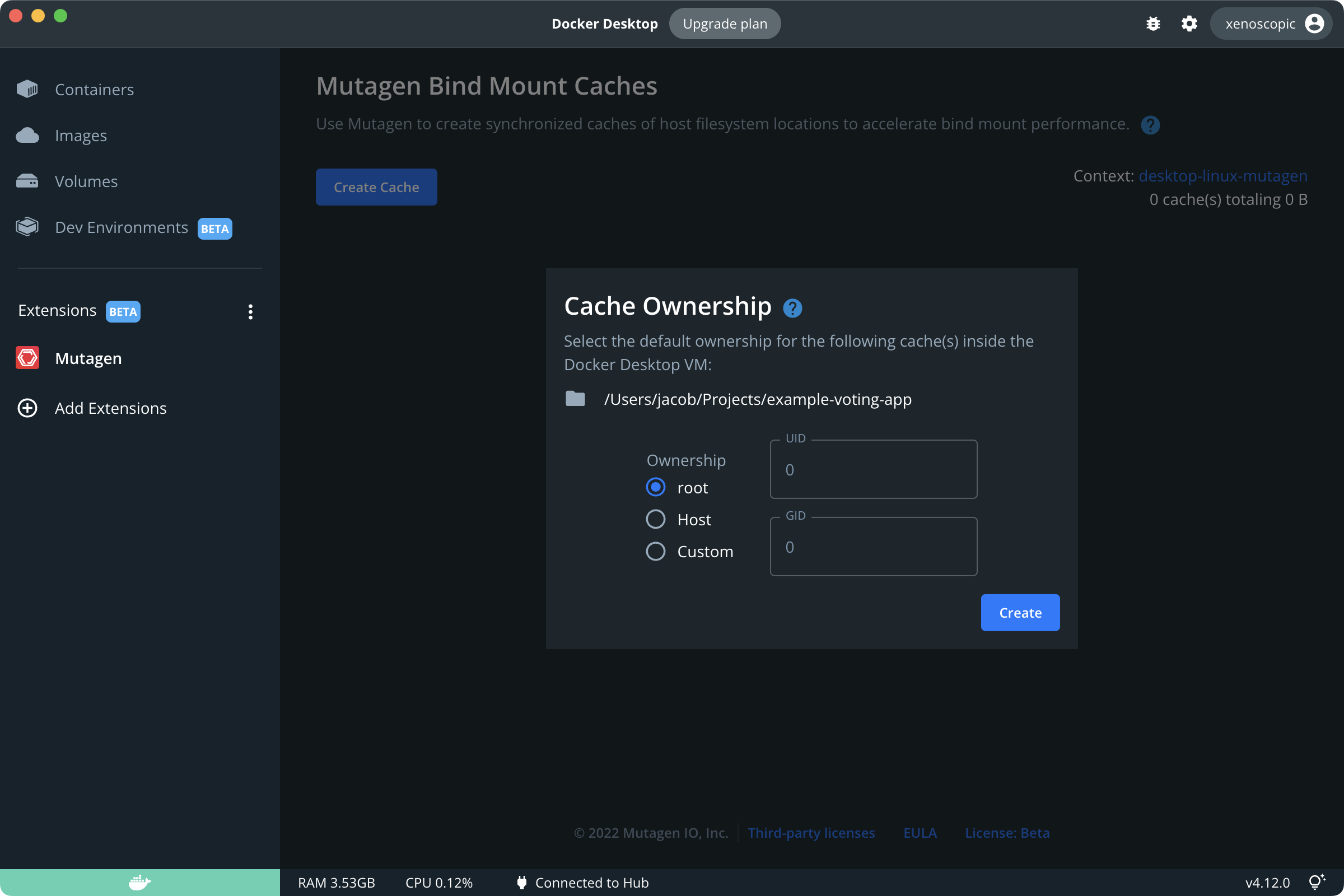 Once the cache is ready, you should see the following: 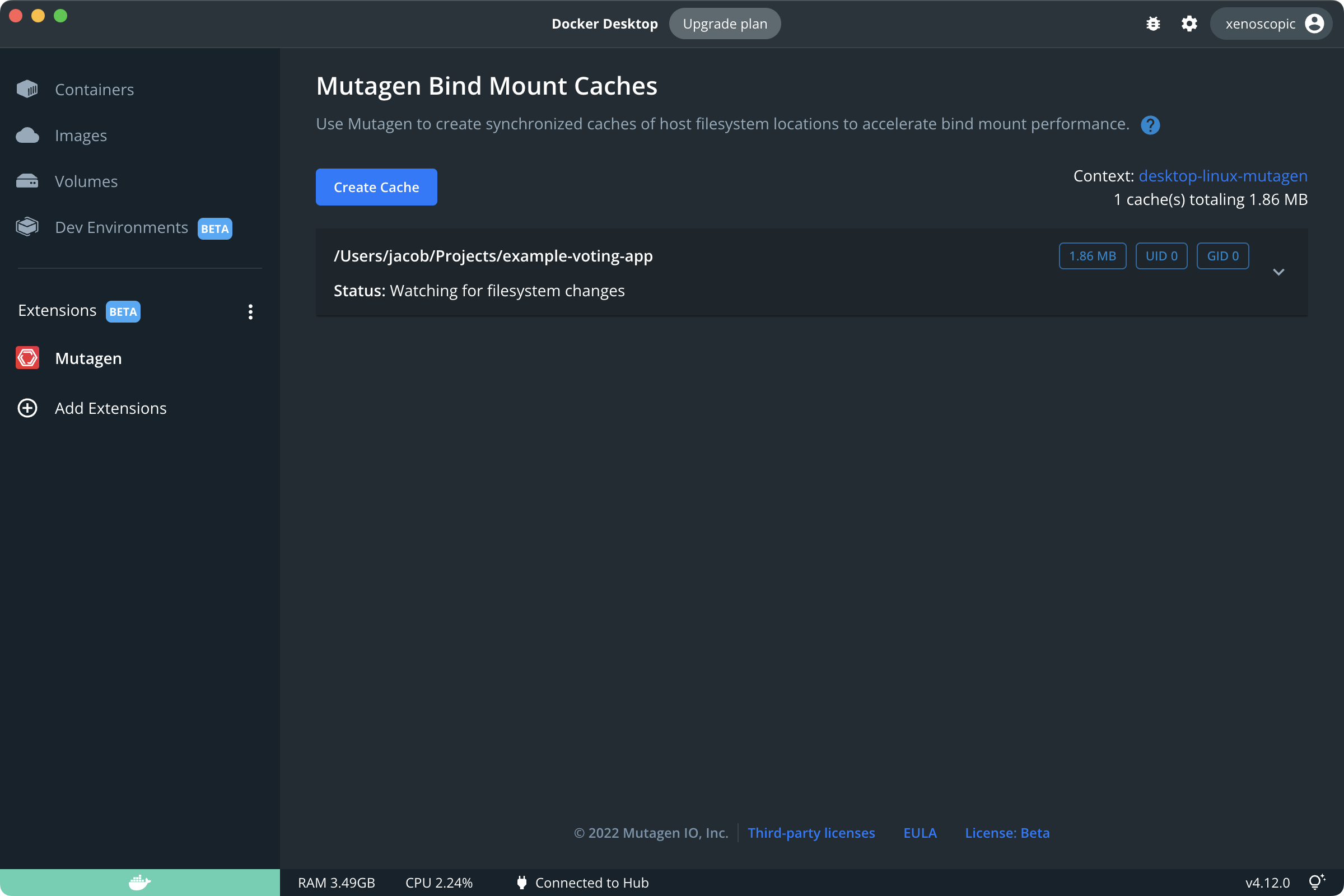 Filesystem changes made to this location/cache on the host or in the VM’s containers will now propagate via bidirectional synchronization. Cached files will be stored on an ext4-backed filesystem inside the Docker Desktop VM. This can offer substantial performance gains over the virtual filesystems typically used for bind mounts, especially for very large codebases (such as those with tens or hundreds of thousands of files).

Finally, switch to the repository and start the project via the Mutagen context:

Once the project starts, you’ll see that the cache is in use by four of the project’s containers: 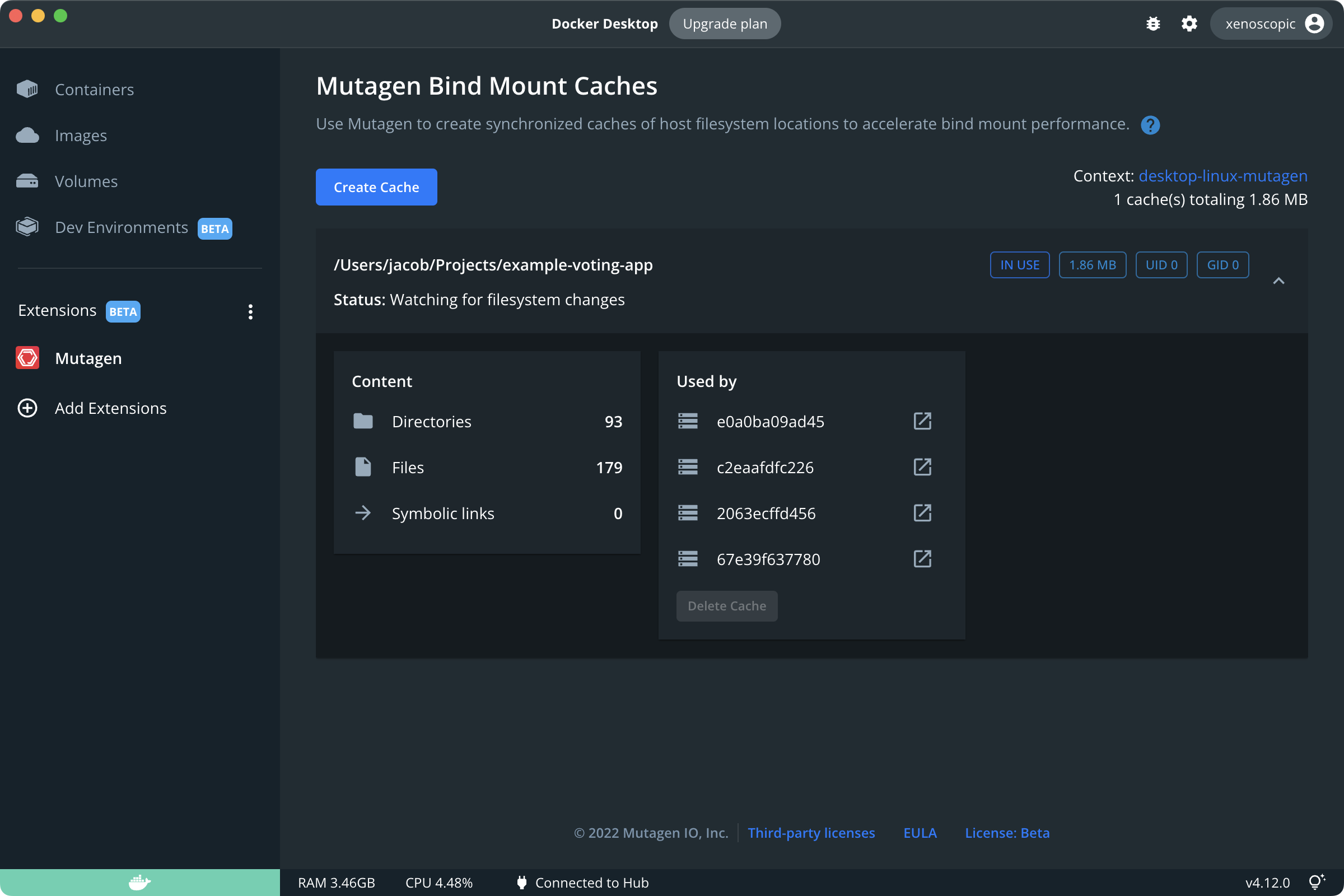 To stop the project from utilizing the caches, you can tear it down using Docker Compose: 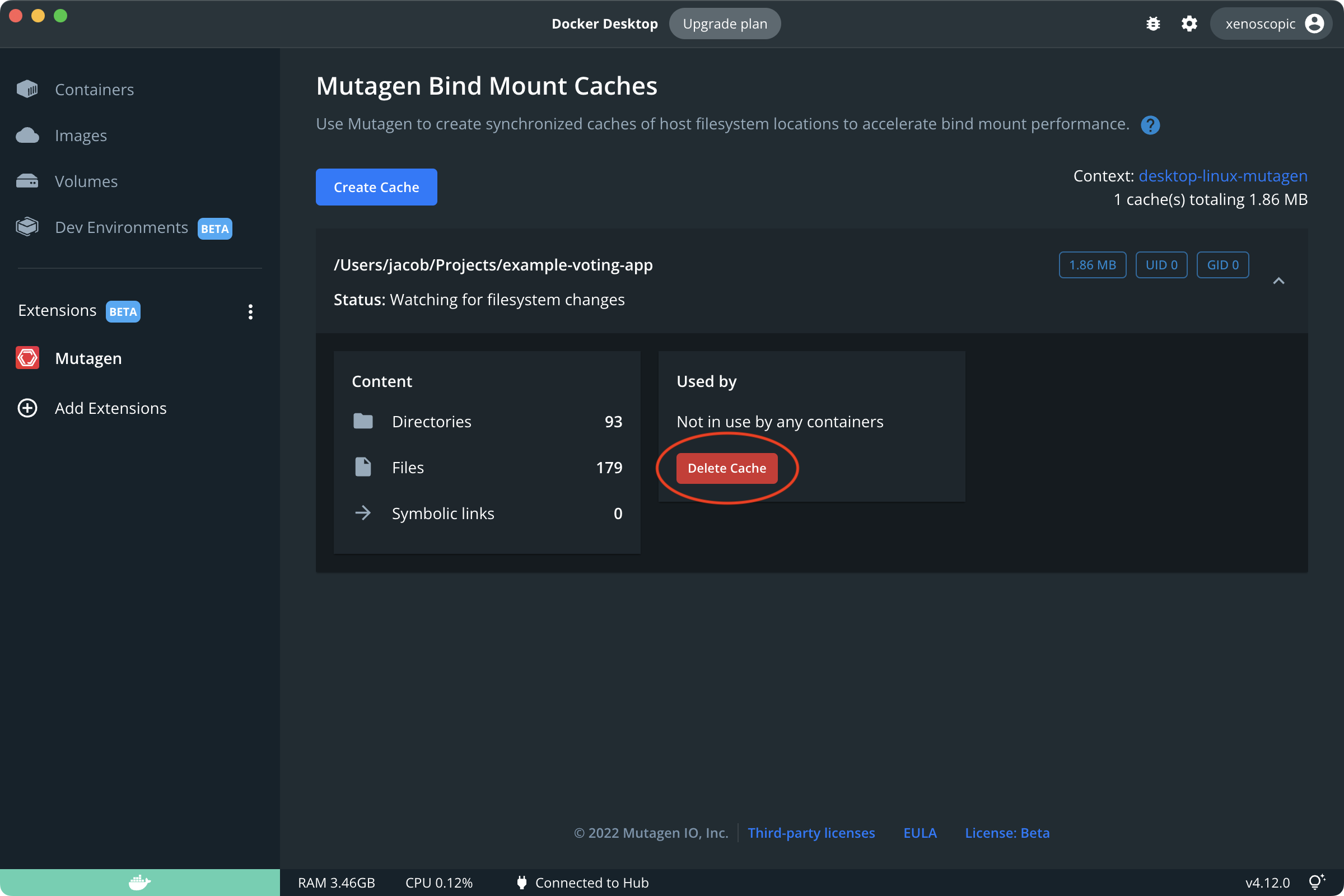 In normal usage, you’d leave the cache active for a much longer period of time (typically however long you’re working on the corresponding project).

The Mutagen Extension for Docker Desktop is separate from Mutagen and Mutagen Compose. It is offered under its own End-User License Agreement.

The extension offers a free usage tier that includes one cache. Creating multiple caches and using custom permissions requires a subscription that can be purchased here.

The initial release of this extension is focused on replicating the behavior of Docker Desktop bind mounts with enhanced performance, but additional functionality is being developed. The development roadmap for the extension will be driven by user feedback, but currently planned additions include:

The extension has the following known limitations:

Both of these issues will likely be addressable in the future as the extension platform and SDK evolve.

As with all synchronization solutions, conflicts and problems can arise. These will be indicated on the corresponding cache pane: 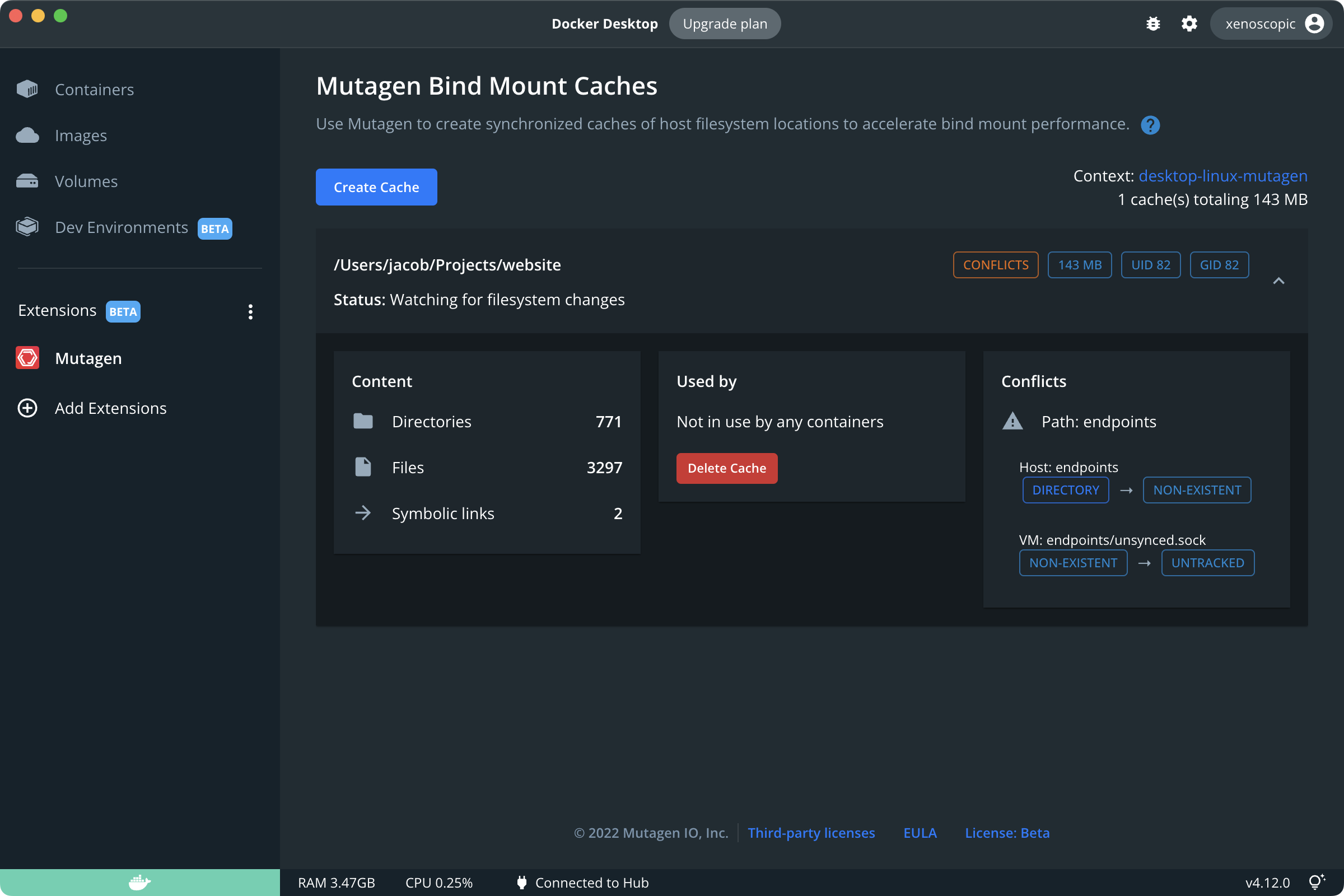 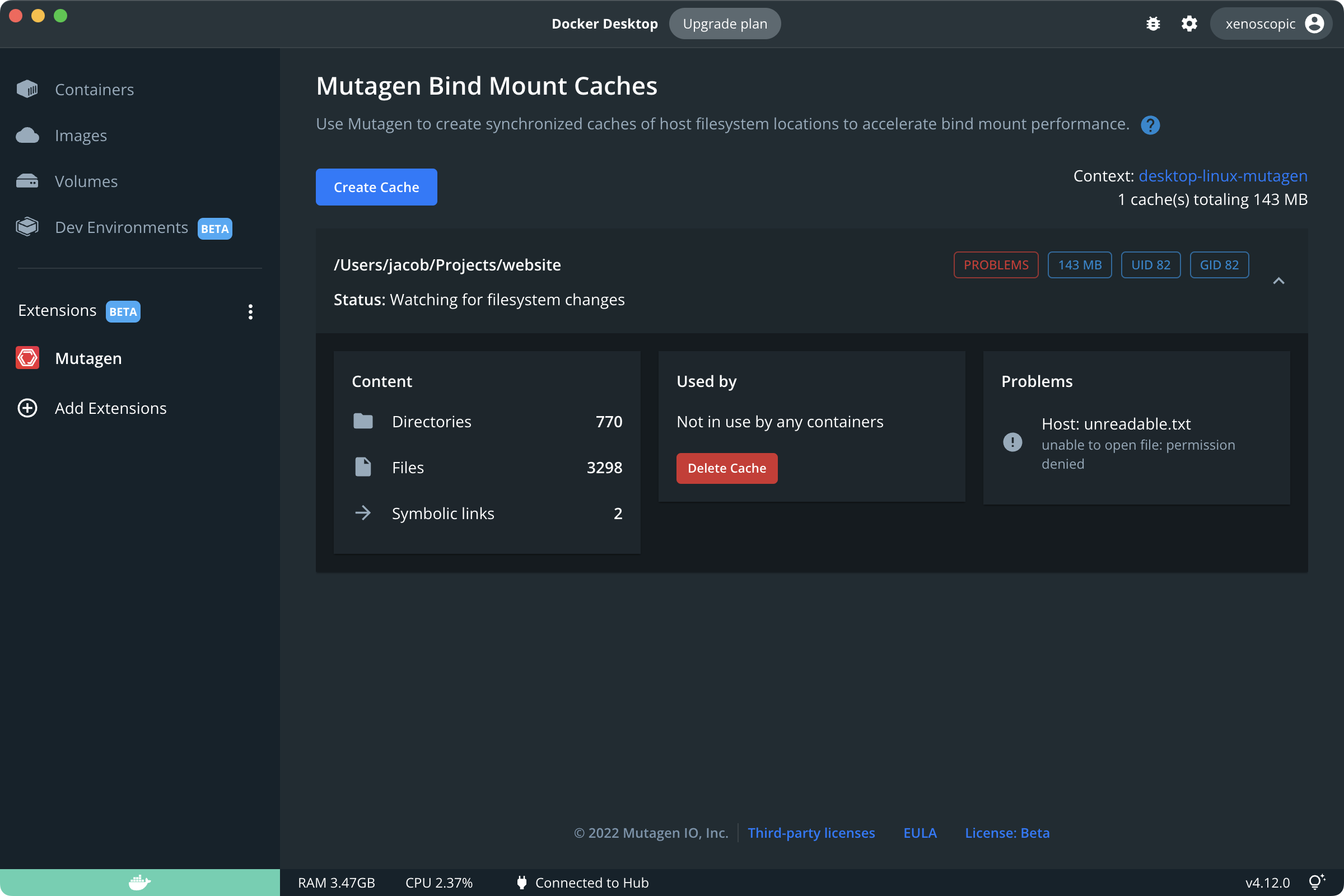 Non-conflicting and non-problematic files will continue to synchronize even if conflicts or problems are present, so these indications are not catastrophic.

Mutagen uses heuristics to auto-resolve most conflicts, meaning that conflicts will typically be limited to the deletion of parent directories of content that isn’t normally synchronized (such as Unix domain sockets or FIFOs).

Problems, on the other hand, are typically due to an inability to scan, update, or delete files because of insufficient permissions.

In order to help us design better auto-resolution heuristics, please feel free to report and discuss conflicts and problems via the Mutagen Docker Desktop Extension issue tracker or the Mutagen Community Slack Workspace.